These days, the terms of "dimension" is not limited to vector spaces -- in Japanese internet slang, "2.5D girls" refer to girls rendered using 3DCG. As a matter of fact, you can actually formally define dimensions that aren't integers -- fractal dimensions are in general irrational numbers.

I got a bit off track. This article is about expressing "depth" with Cocos2d-x.

Cocos2d-x is a game engine for 2-Dimensional games, as its name implies. However, with just a little extension, we can achieve "depth" expression -- I will introduce such an extension in this article.

The technique that we will use is "Perspective View Transformation" often used in 3DCG literature. We will scale our sprite images according to the coordinate in the depth direction, by which we achieve a virtual "depth" experience. 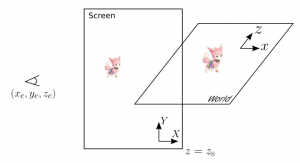 The perspective view transformation onto the xy-plane is obtained by the following equation:

), we can simplify the definitions of the constants:

Things that are farther away appear smaller. The scaling factor

for such an effect is calculated according to:

Before implementing the feature in this article, we have conventionally specified the position of the character as follows:

We can naturally extend our code for this feature by defining the following class:

Using the PointWithDepth class, we can specify the character position and scale factor based on the World coordinates :

Our implementation allows us to express perspective-transformation-like effects with 2-Dimensional libraries. The figure below illustrates our output. 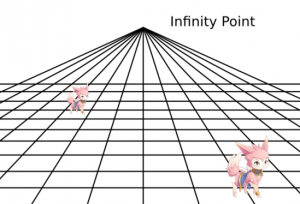 You can probably apply the trial & error method and adjust some parameters to achieve the same kind of expression. However, I think we should always think systematically and mathematically before writing any kind of code -- it's the only way to assure code quality. 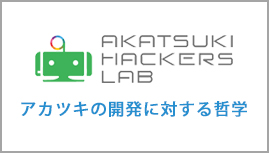